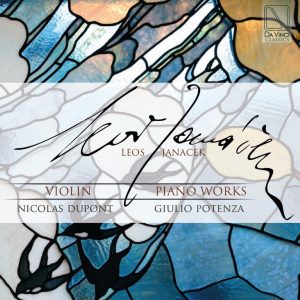 Listen on Spotify
Listen on Itunes

FROM ALBUM NOTES by Evan Kassof:

Leoš Janáček (1854-1928) is finally becoming regarded as one of the most important composers of the early 20th century. His operas and symphonic work are widely known, while his chamber music is just beginning to be discovered. Pianist Giulio Potenza said that the exigency to make these recordings “…came around three years ago when I started to work on the piano sonata. It was a huge discovery and I felt that I had to dig much deeper into his repertoire.” The selection of pieces showcased on this disk represents every era of Janáček’s output, from the very early Zdenka Variations to the Violin Sonata completed 42 years later. These works were chosen by Potenza to show how Janáček’s musical voice – especially in the chamber works – developed continuously from the Zdenka Variations. Included, too, are some of Janáček’s works for violin and piano (performed by violinist Nicolas Dupont) because, as Potenza says “I chose to include the violin sonata and Dumka in the same CD to offer a bigger perspective to the listener and give them a better idea of Janáček’s musical world.” These two works also bookend the chronological span of this disk’s collection, with the violin sonata pre-dating the Zdenka Variations by about a year, and the Violin Sonata being completed in 1926.[…]